ISSUE: Presidio Interstitials are not displaying on Home Page

In the Presidio theme, Interstitials refer to the blocks of customizable content that break up the content of the Home Page feed. If you cannot see them, there are a few ways to troubleshoot:

Did you supply content for this section in the Customizer?

The section requires that you add widgets to each section; it will not auto-feed in any content without you providing these pieces. You can upload content for the three boxes by going to Appearance>Customize and then selecting the Widgets tab. In the next screen, look for the tab that says Interstitial #1 and Interstitial #2, then click Add a Widget to begin customizing. Here is a short video showing you how to do this:

Did you set the interstitial to appear after the total number of posts on the page?

Our themes give you the ability to dictate where you want the interstitial to appear. However, the number of posts it’s set to appear after is impacted by how many total posts you want to appear per page. If the former is bigger than the latter, the section will not appear.

For example, let’s say you have set up your theme to display 10 posts per page, and the interstitial to appear after the 11th post. Because there is no 11th post, the section will not appear. 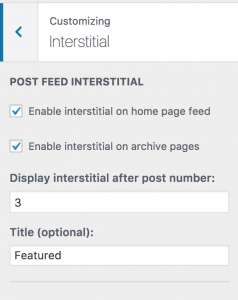